Strange things are afoot at the House of Jitters!  We have unearthed Audio Recordings of the Acri Creature Feature in its earliest days, 1971 and 1972, specifically, and we unearthed them from the back of my closet, to be even more specific.

Uploaded to Archive.org for preservation of its early TV history, the audio (only) recordings are most likely the largest collections of its kind.  Young super fan Dave Epland taped the program on his tape player and saved them over the years.  A few fellow fans had them professionally transferred in the early 2000s. I've notated below the audio track listings as they appear on Archive.org. Click to hear the  Acri Creature Feature Audio Recordings on Archive! 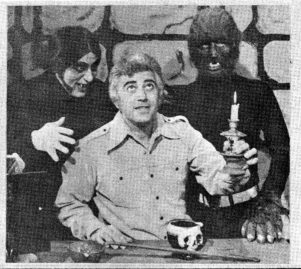 Click above link to visit!  The following is the contents of the tracks at the link, including elusive titles and dates of the movies played on The Acri Creature Feature!

Track #1 – The Inn on Dartmoor

March 25th, 1972 – Slaughter of the Vampires (in Moline) and Killers from Space (in Peoria). (creep Abraham Hantz)

May 6th, 1972 – The Black Room (in Moline) and Robot Monster (in Peoria) (Epland comments, “old Vincent and Emmit rerun”)

(Missing June 26th, but they played The Snow Creature and Cry of the Werewolf)

May 1st, 1972 – The Mummy (visit by TKEs and Creature creators Don Raymond and Bill Flannery; drunk!)